In May us 2, Vomet and Bert took a drive down to Dartmouth to visit Lakeside where one of the legendry jams was taking place. Vomet was painting so we decided to jump in and take a look. The lakeside wall isn’t exactly legal but the sites tolerated by the owners. It’s massive! one of the longest single walls in Europe weighing in at approximately 2km long and it’s all painted. You get the odd fisherman when the tides in and a few dirt bikes but that’s it as the path ends at a petrol storage depot and you cant get any further….we tried. There was a decent turnout considering the weather wasn’t the best, but it’s definitely a spot to visit in the sun.

The Lakeside Graff Jam was started in 2010 by Tony Keen, Fivethree, Stamp and Sian.E as the old School Reunion and Graff Jam. Even for its first outing it was big with over 30 of some of the best artists – Old School and new School painting alongside each other at this reunion. The event continued in 2011 with Sian.E and Colt 45 and slammed it with over 58 artists repping with some incredible piece of work. There were again old School, new School and artists from all over the UK, top names and top pieces. 2012 saw the third year but despite the horrendous rain 20+ artists showed and produced some quality pieces. A second event for 2012 is to be organised for July time (weather permitting) for those that didn’t make it the first time round and is promising to be even bigger than the previous 3. 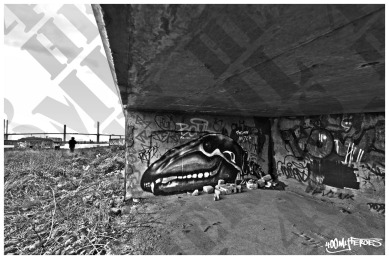 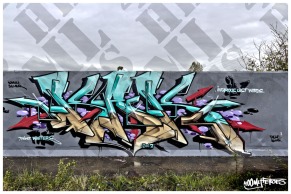 I dunno, its a lot of photos of stuff... graffiti photos. What is it? What is it mate... A graffiti blog really, showcasing West Midlands graffiti artists really... ar... i think.

Erm, i suppose that's more or less it. Spotlight on the West Midlands. Gi'n in some light, because everything else shines so bright. Lot of talent here, much overlooked scene.

Latest items on the site

Type your keyword(s) below to search 400ml Heroes